A local church that organized an outreach outside Lititz Springs Park earlier this month during the Lititz Pride Festival responded to accusations made by event organizers and participants included in an article recently published by LNP/Lancaster Online.

The article, “Protesters with Christian nationalist ties protest Lititz Pride event; refused to leave private park until police came,” was published by LNP on June 23 and made several allegations against “protesters” outside of the event, specifically mentioning Joel Saint, pastor of the Independence Reformed Bible Church (IRBC) in Morgantown, and Chris Hume, managing editor of The Lancaster Patriot.

Author Dan Nephin stated in his June 23 article that, “A pastor who espouses Christian nationalist beliefs and the editor of a conservative publication were among about a dozen people who protested Sunday’s Lititz Pride Festival, refusing to leave the private park until police came, according to organizers.”

The article also stated that, “One man carried a sign that said ‘Burn Gays,’” an accusation participants in the outreach vehemently deny.

Nephin’s article came after several LNP pieces highlighting an event discussing the original Pennsylvania constitution and its Christian roots originally scheduled to take place at Tied House restaurant in Lititz. Backlash on social media and in the public led to the relocation of the event to another venue in Quarryville and repercussions against the owners of Tied House who also run St. Boniface Craft Brewing Co. in Ephrata.

In a statement from IRBC, representatives from the church said LNP’s June 23 article painted an impression that its members were “engaged in some sort of hate-filled protests in Lititz” at the pride festival.

“The story is riddled with innuendo, half-truths and outright falsehoods and tries to paint our church as advocating for some sort of governmental overthrow,” the church said in its statement. “The truth is that some from our church did visit Lititz on that day to advocate for Christ and His church. Our church believes in the truth and accuracy of [the] Bible plus the dangers and reality of sin. The outreach was intended to provide opportunities for discussion amongst those who would celebrate an unbiblical lifestyle.”

IRBC said the LNP article chose to highlight a sign held by a member of the group that read “Christ Hates Pride,” stating that the viewpoint expressed on the sign can be found throughout the Bible.

One sign attributed to the group that is forcefully denied as existing was one that allegedly said “Burn Gays.”

In the LNP article, representatives from Lititz Chooses Love, the organizers of the pride event, stated that, “Another man, after being told not to enter the park by police, trespassed into the park and walked through the playground area with a sign that said, ‘Burn Gays.’”

“Speaking of truth, what can we say about the LNP’s report that one of our group was holding a sign that said, ‘Burn Gays?’  This is simply false,” the church said in its statement.

Representatives from The Lancaster Patriot reviewed video footage from the entrance of Lititz Springs Park and the pride event on June 19 and did not see anyone holding a sign that stated “Burn Gays.”

The closest approximation to the allegation was a sign held by a man who appeared to be an attendee of the Lititz Pride Festival event that said, “Born Gay – Praise God.”

The Lancaster Patriot reached out to Nephin at LNP through an email and phone messages to question whether the reporter was provided any photographic and/or video evidence of the existence of the alleged sign. Nephin and LNP did not respond to requests for comment on the article.

Messages were also sent through social media to Parker Webb, president and founder of Lititz Chooses Love, to comment on the statements about the existence of the alleged sign. Webb did not respond to requests for comment.

“The LNP report was a vicious hatchet-job masquerading as news,” IRBC said in its statement. “We understand that the LNP is in the business of selling newspapers and controversy sells. However, creating controversy by casting our church as a terrorist group and smearing as haters those of us who are concerned about the eternal welfare of others sheds more light on the editorial bias of the LNP than it does on what happened in Lititz.”

The LNP article also tied the evangelism taking place outside the pride event to the separate MARS event on June 23. The church said although there’s overlap between MARS and IRBC, the two events were “entirely unrelated.”

In a separate statement from MARS, the group said LNP’s article attempted to link the two separate events and that it was participating in a “Christian Nationalist protest of a pride festival.”

MARS said the change in venue for the June 23 event was a result of “a social media storm that threatened the livelihood of the venue owners” and had nothing to do with the Lititz Pride Festival.

“Also for the record, MARS does not advocate for taking control of civil government and forcibly converting the public to Christianity which seems to be what the term ‘Christian Nationalist’ is meant to imply,” the group said in its statement. “MARS advocates for people to study their Bibles and learn that it applies to all areas of life, not just the spiritual. The Bible speaks to taxes, education, immigration (you might be surprised), marriage, art, child-rearing and everything else.”

Saint, who spoke to The Lancaster Patriot by phone on Tuesday, said he didn’t personally read the LNP article about the Lititz Pride event, calling the newspaper “confirmed liars.”

Saint said about 18 people took part in the outreach outside the pride festival, leading to “hundreds of conversations” between the public and attendees of the event. He said local police instructed the group to stand on the sidewalk outside of the park, but the official interactions with officers were brief.

The pastor said he was struck by the tone of several conversations with participants of the pride festival, saying several individuals expressed there is no meaning to life.

The LNP article highlighted statements made by Kellye Martin, events manager for Lititz Springs Park, who told the newspaper she was notified of the actions by the Christian group by members of Lititz Chooses Love.

Martin said in the LNP article that she informed the group “they could not protest in the park because they were violating park bylaws.” Martin told LNP that the park’s bylaws prohibit political rallies, demonstrations and speeches “to keep the park a welcoming place for all so people can come enjoy the park for respite and enjoyment.”

However, videos posted on social media and seen by The Lancaster Patriot show that at least one official participant of the Lititz Pride Festival made political statements on the main stage in the park.

Jontel Toland, a Lancaster resident who lists his work on social media with The Leon Block Independent Media group, a local news and media organization, gave a spoken word presentation on the history of Juneteenth, the new federal holiday highlighting the end of slavery after the Civil War.

In his presentation, Toland openly talks about reparations to be paid to minority communities.

“Because you inherited all the swamp scum of capitalism and racism next on the world, you are part of the problem,” Toland said in the video posted to Facebook taken from the park bandshell stage. “Each new incarnation of slavery had to match a new level of consumption of the white mentality. Each new layer of capitalism, of white patriarchal, colonizing, corporate, consuming layer has enslavement built in whether you know it or not. We are not free.”

The Lancaster Patriot attempted to contact Martin by phone and email to ask if the bylaws regarding demonstrations and speeches also apply to participants of an event sanctioned in the park. Martin did not respond to the publication for comment. 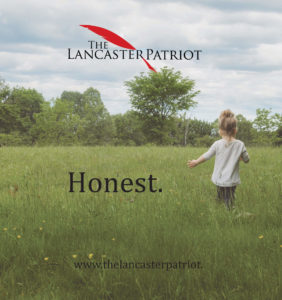